So I managed to get a tablet that’s actually a full PC. It has no name, but you can find it  when you google for “tablet g101 atom“. 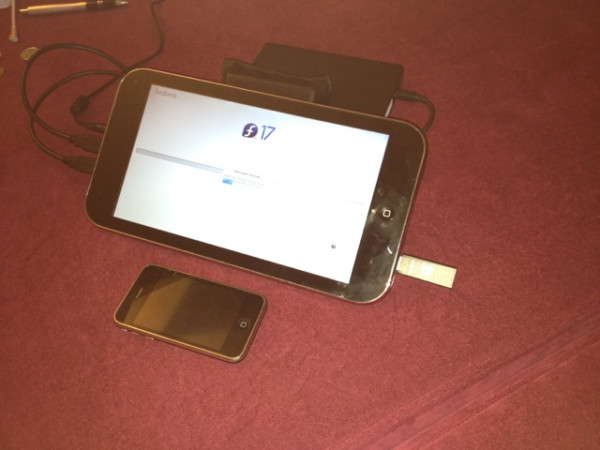 The tablet installing Fedora 17 from USB DVD. An iphone 3G is placed in front for size (and shape) comparison

The amazing thing, Fedora 17 installed straight onto it from USB-DVD. I did not need to do any command line tinkering to load any kind of kernel module, driver or xorg driver. It installed, booted and all the hardware worked, though I haven’t yet tested the HDMI output. Wireless worked fine, sound and video worked, even the webcam! And of course the touch screen worked, though I haven’t confirmed multitouch, as I don’t know of an app that supports it to test it.

So what didn’t work? The biggest issue is that the machine cold boots from sleep mode, instead of resuming. It seems to enter sleep mode fine, and the LED blinks in that sleepy way, but it will just cold boot after that. The “home” button seems to just map to a return key. And I haven’t found the accelerometers yet, so it won’t rotate the screen automatically like it did with the pre-installed win8 beta. I tried using lm_sensors and i2c_detect but those do not find anything. When you rotate the screen using xrandr, the touchscreen input does not rotate its location to match, and I haven’t found the right xinput command yet. The speaker volume is a little on the low side.

Gnome3 – made for tablets!

There were a few things that made using this device a frustrating job, mostly because of gnome3. Which is odd because gnome3 was meant to be tablet friendly. You can select the Universal Access symbol and get a virtual keyboard to login, kudos there since I have no keyboard unless i bring along a USB keyboard. But when the virtual keyboard vanishes, it goes into that bottom tray bar, which auto-hides. It is next to impossible to get the tray bar to appear again to select the keyboard. If someone knows how to NEVER hide the tray bar, let me know, google only knows about people who want to never see the tray bar at all). Next, selecting the “activities” is way too hard. Pressing it just fails too often. The same for selecting “windows” or “applications”. This is not due to the touch screen being of bad quality, as for instance scrolling using the scroll bar in firefox works fine.  Scrolling through the application list most certainly will start the application you didn’t want, because your finger motion either didn’t scroll up enough (so it bounces back without scrolling) or it scrolled too far (hitting the top and thereby jumping out of the select, and you have to start from scratch). It’s a terrible terrible user experience.

Since this is a mobile device, I opted to use full disk encryption. But that was a mistake. When you boot the device, you get the nice login prompt for the passphrase for your root filesystem, but there is no virtual keyboard. I had to plugin a USB keyboard to boot the device. We can’t really load X here, as the rootfs is still encrypted. I’m afraid there is no other way then to add a new virtual keyboard option, somehow.

All in all, it’s a nice device. I can’t wait to put it in the hands of gnome3 developers and say “go fix it!”.

I’m not sure if you can actually buy it anywhere. I bought this one on craigslist. It seems most links I found on google lead to Chinese shops who want to sell you at least 10. The price would probably be somewhere between 200-400 dollar each, for a version with a little less disk and ram then I tested with.

So, Linux is almost ready for the tablet!